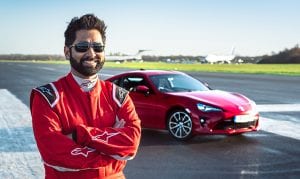 As a voiceover, I am often the very last piece in a long and complicated puzzle. I’m fully aware that days, weeks, and sometimes months of preparation have gone into a project before I get the call, and I aim to step up the mic without making a drama, read the words as they’ve been imagined in various heads, and make it seem effortless.

It’s been a long time since I’ve worked on a project with quite so much preparation, the potential for a huge amount of drama, and one of the best stories you could hope for but that’s exactly what I signed up for when I was booked to provide the voiceover for Toyota and their incredible Blind Driver film.

Dr Amit Patel (@BlindDad_Uk on twitter) lost his sight six years ago. He was a first response medic for the NHS at the time, and hasn’t driven a car since. When he contacted Toyota about their #StartYourImpossible project, he asked them to help him drive again. Between them, they hatched a fantastic, slightly terrifying and utterly thrilling plan. You can see the result if you scroll down. 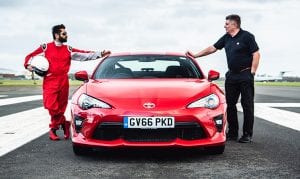 In the recording studio

Audio Description is an interesting area of voiceover and one I can’t claim much expertise in. In general, it is literally about describing what’s happening on the screen to make the experience more inclusive for a blind or visually impaired viewer. It’s not acting, it’s low key and it has to fit around the existing audio track. For this project, we struck a mid-point between describer and narrator. Some of the pictures were designed to build the tension, and we all felt that it would be right to signal this with my delivery. But at other points, Amit’s emotion was so great, my description needed to step back, and simply support Amit’s story-telling. 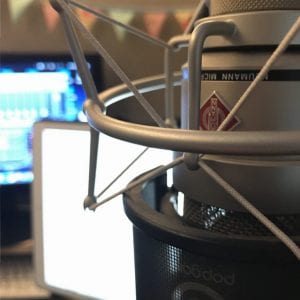 The voiceover recording session was collaborative, between the film director, the editor and myself and it was incredibly rewarding to find that although we drew from different areas of expertise, we quickly agreed about the best ways to approach each part.

Not so very long ago, a project like this would have demanded a booking in a London studio, but having watched the video beforehand, we were able to connect simply using Skype, I recorded high-quality audio in my studio, edited on the fly, and sent the error-free raw audio over to the editor via WeTransfer.com to bring the whole thing together.

And when the script changed slightly a couple of days before the launch? No problem, we all jumped on Skype, I was able to read along with the previous takes, and the new lines slipped in with ease.

That’s the recording process for the voiceover for Toyota, but for the end result and Amit’s incredible story you can watch here.

More about how the film was made can be found on the Toyota blog.

This website uses cookies to improve your experience while you navigate through the website. Out of these, the cookies that are categorized as necessary are stored on your browser as they are essential for the working of basic functionalities of the website. We also use third-party cookies that help us analyze and understand how you use this website. These cookies will be stored in your browser only with your consent. You also have the option to opt-out of these cookies. But opting out of some of these cookies may affect your browsing experience.
Necessary Always Enabled

Any cookies that may not be particularly necessary for the website to function and is used specifically to collect user personal data via analytics, ads, other embedded contents are termed as non-necessary cookies. It is mandatory to procure user consent prior to running these cookies on your website.

SAVE & ACCEPT
Scroll To Top