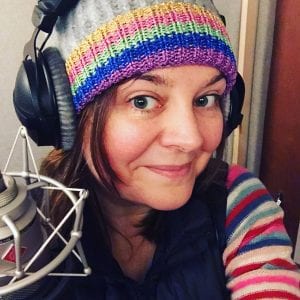 It’s also that time of year when food banks are expecting more people than ever through their doors.

Shout out to the Benztown Radio imaging wizards in LA, once again running their #cans4cans drive. You post a picture of you wearing your “cans” (headphones) and tag it #cans4cans, they’ll donate a can of food to their local food bank. Last year over 900 people took part.

You can find out more about them here and join in too.

Here in the UK, the Trussell Trust is well known for their work setting up and running food banks across the country and we’ve been long-time supporters. This year we’re also popping a few extra things into our trolley each time we shop and will be dropping them off to our local food bank before Christmas.

The Trussell Trust are anticipating a greater demand than ever this year, and figures released last month show the need for food banks in December is increasing year on year. Colder weather increases pressure on people already in crisis with families struggling to cover basics.

If you want to get involved in the UK, you can find out more about the Trussell Trust, the donations that will most help, and where you can drop off, by click here.

They’re asking for donations sooner rather than later in the month to reduce pressure on volunteers at food banks as they work to distribute donations.

This website uses cookies to improve your experience while you navigate through the website. Out of these, the cookies that are categorized as necessary are stored on your browser as they are essential for the working of basic functionalities of the website. We also use third-party cookies that help us analyze and understand how you use this website. These cookies will be stored in your browser only with your consent. You also have the option to opt-out of these cookies. But opting out of some of these cookies may affect your browsing experience.
Necessary Always Enabled

Any cookies that may not be particularly necessary for the website to function and is used specifically to collect user personal data via analytics, ads, other embedded contents are termed as non-necessary cookies. It is mandatory to procure user consent prior to running these cookies on your website.